* In case of any delay in receiving the OTP, you may verify it later. Please proceed without verification.

Enter your City name or Pincode

Pinjore is located very close to Chandigarh. It is a small town in Panchkula district of Haryana. It is over 1,800 feet above the sea level overlooking the Sivalik Hills. Pinjore is located on coordinates 30.7972°N 76.9172°E. The city is very famous for its Pinjore Garden and HMT factory. Pandavas stayed here for one year in order to hide from Duryodhan. Prithviraja II had defeated the chief of Panchapura now Pinjore. Baisakhi festival celebrated in Pinjor is very famous. Because of its proximity to Chandigarh it is easily approachable by roadways, railways and airways. 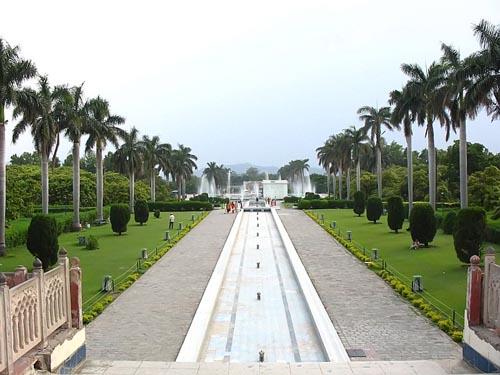 Though the city has a pleasant weather throughout the year, winters are preferred to visit the town. If you want to participate in special Baisakhi festival visit Pinjore in the month of April.

Pinjor is linked with tales from Mahabharata. As per the beliefs five Pandavas stayed here during their exile for one year in order to hide from Duryodhan. Pandav used to dig a kund every day for the generation of water. Some them like Draupadi kund, Dhara Mandal etc. still exist till date. It was initially known as Panchpura, and later was named Pinjore.According to the history of Chauhan, Prithviraja II had defeated the chief of Panchapura, probably Pinjore. Various historic remains discovered from Pinjor belongs to 9th century A.D. to 12th century A.D. the city also had an ancient garden in around 1030 A.D. that was destroyed by the legendary Timur (1336-1405), the Mongol conqueror. The ancient temples in the city is believed to be built by the Pandavas. The gurudwara is believed to be built in 1474 when Guru Nanak stayed here for a short period and the mosque was built over four hundred years when Mughal emperor Jehangir stopped here after winning a battle.

Geography and Climate of Pinjore

Pinjore coordinates at 30.7972°N and 76.9172°E. Pinjore is a small town in Panchkula district of Haryana. It is situated close to Chandigarh and is over 1,800 feet above the sea level overlooking the Sivalik Hills. The average temperatures for summers is 35 degree Celsius and for winters is 18 degree Celsius, it receives rainfall in months of July, August and September.

Places of interest in Pinjore

Pinjore GardensPinjore Gardens or Yadavindra Gardens is located in Pinjore. The garden built by Patiala Dynasty Rulers in Mughal Gardens style.The beautiful gardens is Located in Pinjore it is about 22 km from Chandigarh on the Ambala-Shimla road. Built in 17th century by architect Nawab Fidai Khan during the rule of Aurangzeb (r. 1658-1707). It is now known by the name of 'Yadavindra Garden' in the memory of Maharaja Yadavindra Singh who fa,ous ruler of erstwhile princely state of Patiala. It was initially built by Fidai Khan, and was later refurbished by Yadevendra Singh.The garden is laid in seven terraces. The main gate of the garden opens into the highest first terrace with palace built in Rajasthani–Mughal style called the “Shish Mahal” adjoined by a romantic "Hawa Mahal".The second terrace has a arched doorways and "Rang Mahal" (painted palace). The third terrace has cypress trees and flowerbeds, and these trees leads to dense groves of fruit trees. The fourth terrace has the "Jal Mahal" (palace of water), a square fountain bed and a platform to relax. Fifth terrace has Fountains and tree groves. The lowermost terrace has open-air theatre in a disc-like structure. There is a zoo adjoining the gardens. There is a temple in the complex and an open air museum. A heritage train is recently introduced to visit all the monuments and the gardens. Baisakhi (spring) festival in April and the Mango festival in June and July are main attractions at the gardens. The timings are 7am to 10pm. The nights are illuminated in the park.

According to Archeological excavations the area is found to have earliest habitation by man to 1.5 million years ago. Tools belonging to Paleolithic period were found in the region.The ruins of Bhima Devi Temple reminds the ancient history of the area. Bhima Devi Temple ruins have figures of four-armed Shiva, colossal head of Bhairava and forms of Ganesha and Shakti. It is believed that the temple belonged to the old Panchayatan group and antedate to the 9th to 11th century A.D.

Events and Festivals in Pinjor

Where to Stay in Pinjore ?

Pinjore has number of deluxe and luxury accommodation options. It has few well maintained hotel to ensure a pleasant stay. The hotels have all basic amenities like furnished air conditioned rooms, television etc. Some of the famous hotels in the city are listed below.

Where to Eat in Pinjore ?

Pinjore is a small town famous for its world fame Pinjore Garden. A number of tourists visit Pinjore to see magnificient Pinjore Garden, hence the city has a number of restaurants, to relish its visitors with delicious food. There is an extra rush during Baisakhi festival, Mango festival and Heritage festival. The food of Pinjore offers a variety of food from Punjab, Haryana etc. The restaurants here offer economic and good quality. Here is a list of Restaurants in Pinjore.

Before visiting Pinjore follow the given tips to enjoy your time at fullest.

There are few tours and travel agents in town who can make and arrange for a pleasant stay in Pinjore.

How to Reach Pinjore ?

Pinjore, can be easily reached by road, rail and air from all parts of the country. It is well connected with Chandigargh, with a road distance of 20 kilometres (12 mi). It is 5 kilometres (3.1 mi) from Kalka, on the road to Shimla.The nearest airport is Chandigarh Airport. Regular buses like Volvo Coach, Deluxe, Semi-Deluxe and Express buses are easily available from various part of the nation. Kalka railway station is nearest with just a distance of 5 kms. It can also be reached through Chandigarh which is just 20 kms from Pinjore.

Comments / Discussion Board - About Pinjore